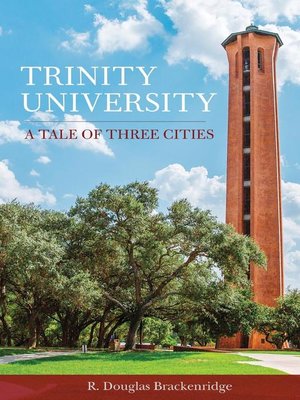 Since its founding in 1869 by the Cumberland Presbyterian Church, Trinity University has been engaged in realizing the dreams of its founders to become “a University of the highest order." In Trinity University: A Tale of Three Cities, R. Douglas Brackenridge, professor emeritus of religion at Trinity, brings a wealth of scholarship and knowledge to this institutional history.
Brackenridge traces Trinity's unique heritage from its founding in Tehuacana and growth in Waxahachie to its emergence in San Antonio as a top private university for the study of liberal arts and sciences. He draws on historical records and reports, oral histories, newspaper accounts, books, correspondence, and archives to document the university's challenges and successes. He describes Trinity's development within the broader context of private, church-related universities in America, while profiling the administrators, faculty, staff, and students who have contributed to Trinity's rich heritage.
The result is a well-researched story of the founding and the progression of one of the nation's exceptional institutions for higher learning. Illustrations picture Trinity's campuses in three cities and include black and white photographs.