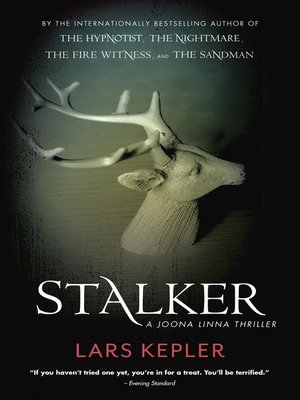 View more libraries...
The police receive a video clip of a woman in a window and reason that someone must have been standing in the garden just outside her house to be able to film her. The next day the woman is found dead in her home, the vicious violence of the scene shocks even the most seasoned investigators.

A few days later, another clip is sent anonymously to the police, but there's no way of identifying the woman before she too falls victim to a brutal attack. When he
finds her, the woman's husband is so traumatized by the violent scene that, in a state of panic, he starts cleaning the house. He even washes the blood from his
wife's body and puts her to bed, as if nothing is the matter. He may have seen a vital clue but is in such an extreme state of shock, and seems to be suffering from
short-term memory loss that the police cannot usefully question him.

Criminal psychiatrist and hypnotist Erik Maria Bark is called in hypnotize the man in order to unlock his memories of the murder scene. But what Dr Bark uncovers in his sessions with the dead woman's husband make him decide to lie to the police.

It becomes clear that the case cannot be solved without the help of Detective Joona Linna, the man who's been missing for more than a year and has been presumed dead.
From the Trade Paperback edition.