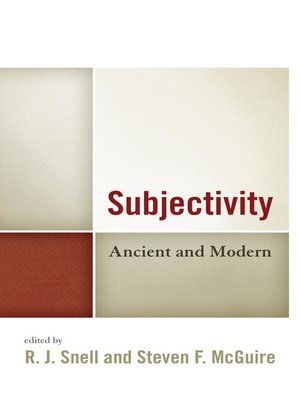 View more libraries...
In Subjectivity, sixteen leading scholars examine the turn to the subject in modern philosophy and consider its historical antecedents in ancient and medieval thought. Some critics of modernity reject the turn to the subject as a specifically modern error, arguing that it logically leads to nihilism and moral relativism by divorcing the human mind from objective reality. Yet, some important thinkers of the last half-century—including Leo Strauss, Eric Voegelin, John Finnis, and Bernard Lonergan—consider a subjective starting point and claim to find a similar position in ancient and medieval thought. If correct, their positions suggest that one can adopt the subjective turn and remain true to the tradition.
This is a timely question. The common good of our polity encounters a situation in which many believe that there is no objective reality to which human minds and wills ought to conform, a conclusion that suggests we can define and construct reality. In light of this, the notion of a natural or objective reality to which human beings ought to conform becomes particularly vital. Should we, then, adopt the modern turn to subjectivity and argue for objective truth and moral order on its basis, or reject the subjective turn as part of the problem and return to an earlier approach that grounds these things in nature or some other external reality? Critics of modern subjectivity argue that the modern turn to subjectivity must be abandoned because it is the very source of the nominalism that threatens to undermine liberal democracy. Others argue, however, that subjectivity itself logically leads to the recognition of an objective reality beyond the mind of the individual. Edited by R. J. Snell and Steven F. McGuire, this collection will be of particular interest to intellectual historians, political philosophers, theologians, and philosophers.