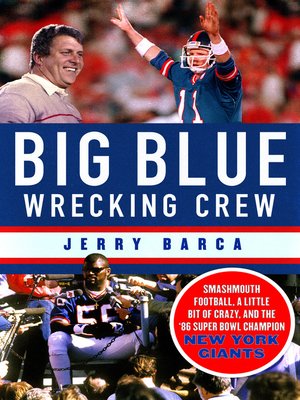 A marauding linebacker who changed the game of football, a tough-as-nails quarterback, and a fiery head coach helped the 1986 New York Giants leave an indelible mark on the NFL. Big Blue Wrecking Crew is the no-holds-barred story of the team that created Giant Football, the pound-you-into-submission, quarterback-crushing defense, coupled with a powerful ball control offense that resulted in a 1986 Superbowl Championship—the first in team history. In a gripping narrative of the season that changed the course of a franchise, author Jerry Barca takes readers on a wild journey filled with improbable characters. Linebacker Lawrence Taylor partied with the same level of recklessness and violence he put forth when he donned his jersey. Bill Parcells motivated his team in an unrelenting Jersey Guy way, and quiet defensive genius Bill Belichick would go on to greatness.

Based on years of research and hundreds of interviews, Barca chronicles the Giants' rise out of rock bottom to their status as a premiere NFL franchise. From behind-the-scenes personnel discussions of general manager George Young to the meeting rooms with Parcells and defensive coordinator Bill Belichick, Big Blue Wrecking Crew is filled with the riveting exploits of unforgettable players. It is an unfiltered look at how enormous egos came together to win a championship, playing hard and partying equally as hard along the way.

JERRY BARCA graduated from Notre Dame in 1999. While on campus he worked in the athletic department. He's currently a journalist whose writing has appeared on SI.com and in the Star-Ledger, Asbury Park Press, Home News Tribune, Syracuse Post-Stand...

More about Jerry Barca
Big Blue Wrecking Crew
Copy and paste the code into your website.
New here? Learn how to read digital books for free