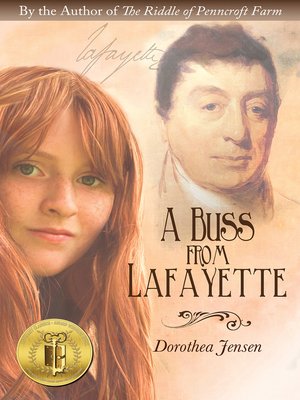 A Buss From Lafayette

Juvenile FictionHistorical Fiction
Fourteen-year-old Clara Hargraves lives on a farm in Hopkinton, a small New Hampshire town, during the early 19th century. She has a couple of big problems. First of all, she has a stepmother, Priscilla, who used to be her spinster schoolteacher aunt. Clara resents that her late mother's older sister has not only married her father but is about to have a baby. To make matters worse, "Prissy Priscilla" keeps trying to make the rambunctious, clever, and witty Clara act like a proper young lady. Secondly, Clara has red hair, making her a target for teasing by a handsome older boy, Dickon Weeks, and by her pretty seventeen-year-old Dread Cousin Hetty. Clara, however, has a secret plan she hopes will change this. During the last week of June, 1825, Clara's town is abuzz because the famous General Lafayette is about to visit their state during his farewell tour of America. In those eventful seven days, Clara learns a lot about her family, Hetty, Dickon, herself, and about Lafayette. She comes to understand the huge and vital role the young French aristocrat played in America's Revolutionary War and to see that her problems might not be quite so terrible after all.
Juvenile FictionHistorical Fiction

Dorothea Jensen, born in Boston, Massachusetts, grew up in Chillicothe, Illinois. She majored in English literature at Carleton College. After teaching high-school English and serving as a Peace Corps volunteer in Brazil, she earned a master's deg...

More about Dorothea Jensen
A Buss From Lafayette
Copy and paste the code into your website.
New here? Learn how to read digital books for free