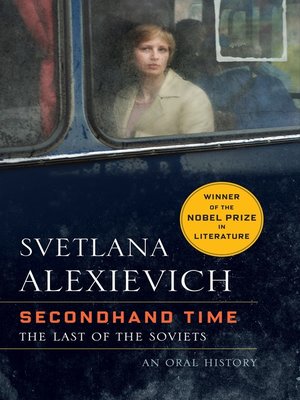 The Last of the Soviets

HistoryPoliticsNonfiction
The magnum opus and latest work from Svetlana Alexievich, the 2015 winner of the Nobel Prize in Literature—a symphonic oral history about the disintegration of the Soviet Union and the emergence of a new Russia
When the Swedish Academy awarded Svetlana Alexievich the Nobel Prize, it cited her for inventing "a new kind of literary genre," describing her work as "a history of emotions—a history of the soul." Alexievich's distinctive documentary style, combining extended individual monologues with a collage of voices, records the stories of ordinary women and men who are rarely given the opportunity to speak, whose experiences are often lost in the official histories of the nation.
In Secondhand Time, Alexievich chronicles the demise of communism. Everyday Russian citizens recount the past thirty years, showing us what life was like during the fall of the Soviet Union and what it's like to live in the new Russia left in its wake. Through interviews spanning 1991 to 2012, Alexievich takes us behind the propaganda and contrived media accounts, giving us a panoramic portrait of contemporary Russia and Russians who still carry memories of oppression, terror, famine, massacres—but also of pride in their country, hope for the future, and a belief that everyone was working and fighting together to bring about a utopia. Here is an account of life in the aftermath of an idea so powerful it once dominated a third of the world.
A magnificent tapestry of the sorrows and triumphs of the human spirit woven by a master, Secondhand Time tells the stories that together make up the true history of a nation. "Through the voices of those who confided in her," The Nation writes, "Alexievich tells us about human nature, about our dreams, our choices, about good and evil—in a word, about ourselves."

Praise for Svetlana Alexievich and Secondhand Time
"For her polyphonic writings, a monument to suffering and courage in our time."—Nobel Prize Committee
"For the past thirty or forty years [Alexievich has] been busy mapping the Soviet and post-Soviet individual, but [her work is] not really about a history of events. It's a history of emotions . . . a history of the soul."—Sara Danius, permanent secretary of the Swedish Academy
"Secondhand Time [is Alexievich's] longest and most ambitious project to date: an effort to use an oral history of the nineties to understand Soviet and post-Soviet identity."—The New Yorker
"In this spellbinding book, Svetlana Alexievich orchestrates a rich symphony of Russian voices telling their stories of love and death, joy and sorrow, as they try to make sense of the twentieth century, so tragic for their country."—J. M. Coetzee

"[Alexievich's] books are woven from hundreds of interviews, in a hybrid form of reportage and oral history that has the quality of a documentary film on paper. But Alexievich is anything but a simple recorder and transcriber of found voices; she has a writerly voice of her own which emerges from the chorus she assembles, with great style and authority, and she shapes her investigations of Soviet and post-Soviet life and death into epic dramatic chronicles as universally essential as Greek tragedies. . . . A mighty documentarian and a mighty artist." —Philip Gourevitch
HistoryPoliticsNonfiction

Svetlana Alexievich was born in Ivano-Frankivsk, Ukraine, in 1948 and has spent most of her life in the Soviet Union and present-day Belarus, with prolonged periods of exile in Western Europe. Starting out as a journalist, she developed her own no...

Secondhand Time
Copy and paste the code into your website.
New here? Learn how to read digital books for free