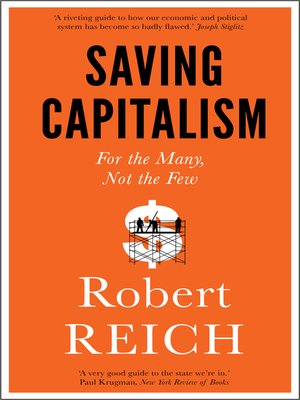 For The Many, Not The Few

'A well-written, thought-provoking book by one of America's leading economic thinkers and progressive champions.' Huffington Post

Do you recall a time when the income of a single schoolteacher or baker or salesman or mechanic was enough to buy a home, have two cars, and raise a family?

Robert Reich does – in the 1950s his father sold clothes to factory workers and the family earnt enough to live comfortably. Today, this middle class is rapidly shrinking: American income inequality and wealth disparity is the greatest it's been in eighty years.

As Reich, who served in three US administrations, shows, the threat to capitalism is no longer communism or fascism but a steady undermining of the trust modern societies need for growth and stability. With an exclusive chapter for Icon's edition, Saving Capitalism is passionate yet practical, sweeping yet exactingly argued, a revelatory indictment of the economic status quo and an empowering call to action.
BusinessManagementNonfiction

More about Robert Reich
Saving Capitalism
Copy and paste the code into your website.
New here? Learn how to read digital books for free