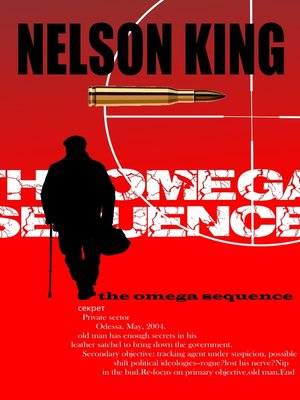 FictionSuspenseThriller
A contract hit jeopardized by politics, personal ideologies, and the love of a beautiful young woman: Prometheus, a muddled assassin, begins to question the morality of the profession he has excelled at for the past twenty years.This international thriller begins in Europe and ends on a remote island deep in the South Pacific. The Omega Sequence could be the answer to mankind's health and save billions of lives in the years ahead-but only if the patent for the new technology is kept out of the hands of the corporation.
FictionSuspenseThriller

Nelson King still considers himself a New Zealander, even though he has lived abroad for almost twenty years. He trained as a civil and structural engineer but is now a full-time novelist. He splits his time between New Zealand, Europe, and Canada...

More about Nelson King
The Omega Sequence
Copy and paste the code into your website.
New here? Learn how to read digital books for free