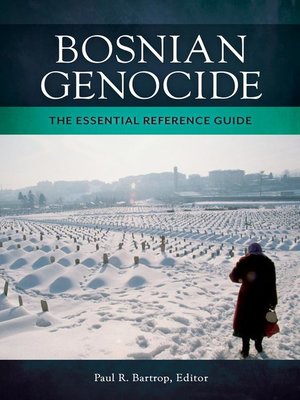 Providing an indispensable resource for students and policy makers investigating the Bosnian catastrophes of the 1990s, this book provides a comprehensive survey of the leaders, ideas, movements, and events pertaining to one of the most devastating conflicts of contemporary times.

In the three years of the Bosnian War, well over 100,000 people lost their lives, amid intense carnage. This led to unprecedented criminal prosecutions for genocide, war crimes, and crimes against humanity that are still taking place today. Bosnian Genocide: The Essential Reference Guide is the first encyclopedic treatment of the Balkan conflicts of the period from 1991 to 1999. It provides broad coverage of the nearly decade-long conflict, but with a major focus on the Bosnian War of 1992–1995.

The book examines a variety of perspectives of the conflicts relating to Slovenia, Croatia, Bosnia-Herzegovina, Serbia, and Kosovo, among other developments that took place during the years spotlighted. The entries consider not only the leaders, ideas, movements, and events relating to the Bosnian War of 1992–1995 but also examine themes from before the war and after it. As such, coverage continues through to the Kosovo Intervention of 1999, arguing that this event, too, was part of the conflict that purportedly ended in 1995. This work will serve university students undertaking the study of genocide in the modern world and readers interested in modern wars, international crisis management, and peacekeeping and peacemaking.