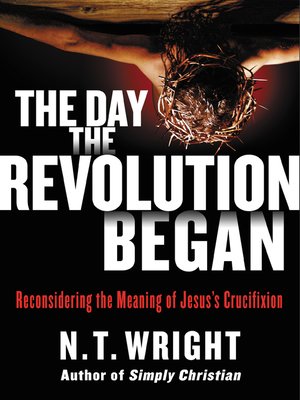 The Day the Revolution Began

Reconsidering the Meaning of Jesus's Crucifixion

The renowned scholar, Anglican bishop, and bestselling author widely considered to be the heir to C. S. Lewis contemplates the central event at the heart of the Christian faith—Jesus' crucifixion—arguing that the Protestant Reformation did not go far enough in transforming our understanding of its meaning.

In The Day the Revolution Began, N. T. Wright once again challenges commonly held Christian beliefs as he did in his acclaimed Surprised by the Cross. Demonstrating the rigorous intellect and breathtaking knowledge that have long defined his work, Wright argues that Jesus' death on the cross was not only to absolve us of our sins; it was actually the beginning of a revolution commissioning the Christian faithful to a new vocation—a royal priesthood responsible for restoring and reconciling all of God's creation.

Wright argues that Jesus' crucifixion must be understood within the much larger story of God's purposes to bring heaven and earth together. The Day the Revolution Began offers a grand picture of Jesus' sacrifice and its full significance for the Christian faith, inspiring believers with a renewed sense of mission, purpose, and hope, and reminding them of the crucial role the Christian faith must play in protecting and shaping the future of the world.

N. T. Wright, one of the world's leading Bible scholars, is the chair of New Testament and Early Christianity at the School of Divinity at the University of St. Andrews, an Anglican bishop, and bestselling author. Featured on ABC News, The Colbert...

More about N. T. Wright
The Day the Revolution Began
Copy and paste the code into your website.
New here? Learn how to read digital books for free