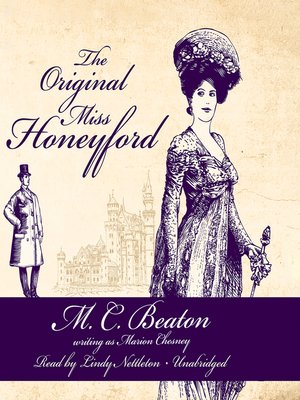 FictionRomanceHistorical Fiction
A dutiful daughter seeks a wealthy husband in this Regency romance by the bestselling author Marion ChesneyMiss Honaria Honeyford was sent to London to save the family fortune by hunting a wealthy husband and, being a loving if not entirely dutiful daughter, she obeyed. But if she was reluctantly willing to surrender her hand, this beautiful young lady—who could ride, shoot, and argue with any man—was not about to lose her head or heart to the dismal dandies of the marriage mart. First she met the arrogantly attractive Lord Alistair Stewart, who treated her infuriatingly like a little girl. And then she met the skillfully seductive Lord Channington, who treated her intoxicatingly like a desirable woman. And now she has to choose just which role to play and just how much risk to run.
FictionRomanceHistorical Fiction

More about M. C. Beaton writing as Marion Chesney
The Original Miss Honeyford
Copy and paste the code into your website.
New here? Learn how to read digital books for free