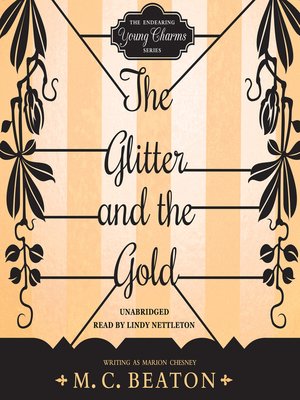 The Glitter and the Gold

FictionRomanceHistorical Fiction
Two lovebirds learn that there's more to life than money in this historical romance by bestselling author Marion ChesneyFanny and her groom had been tricked! Parents on both sides, all impoverished, had decided to recoup their families' losses by marrying their children to the progeny of a wealthier neighbor. The joke was on them, however, when it was outed that neither family had a penny to its name.Charles was not the dark rogue of Fanny's girlish fantasies, but he was chivalrously determined that she should meet someone more appropriate for her than he. And for her part, Fanny was determined that Charles find a woman of greater means who would, perhaps, be the answer to his prayers. Yet as each lover set out to find someone for the other, each was left with the nagging notion that true love might have nothing to do with riches.
FictionRomanceHistorical Fiction

More about M. C. Beaton writing as Marion Chesney
The Glitter and the Gold
Copy and paste the code into your website.
New here? Learn how to read digital books for free