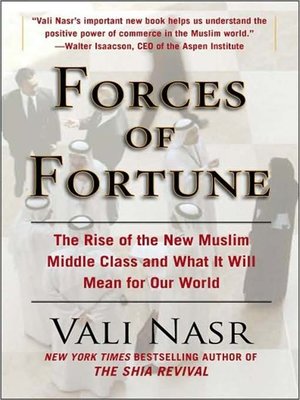 Renowned Middle East expert Vali Nasr's bestselling book The Shia Revival profoundly transformed the debate about the Iraq War by unveiling how the Sunni-Shia rift was driving the insurgency. Now, in Forces of Fortune, Nasr presents a paradigm-changing revelation that will transform the understanding of the Muslim world at large. He reveals that there is a vital but unseen rising force in the Islamic world---a new business-minded middle class---that is building a vibrant new Muslim world economy and that holds the key to winning the cold war against Iran and extremists.

Nasr's groundbreaking analysis will utterly rewrite the wisdom about how the West can best contend with the threat of Islamic extremism, as well as about the future we can expect of the Muslim world. The great battle for the soul of Iran, the Arab world, Pakistan, and the entire region will be fought not over religion, Nasr reveals, but over business and capitalism.

With a deft combination of historical narrative and eye-opening contemporary on-the-ground reporting from his constant trips to the region, Nasr takes us behind the news, so dominated by the struggle against extremists and the Taliban, to introduce a Muslim world we've not seen---a Muslim world in which the balance of power is being reshaped by an upwardly mobile middle class of entrepreneurs, investors, professionals, and avid consumers, who can tip the scales away from extremist belligerence. His insights into the true situations in Iran, Pakistan, Afghanistan, and the crucial bright spots of Dubai and Turkey provide a whole new way of thinking about the troubles and prospects in the region.

Drawing on his in-depth knowledge of the Muslim world's tortured history, Nasr offers a powerful reassessment of why extremism and anti-Americanism took hold in the region---not because of an inevitable "clash of cultures" or the nature of Islam, but because of the failure of this kind of authentic middle class to develop in the nineteenth and twentieth centuries, largely due to the insidious effects first of colonialism and then of top-down dictatorial regimes, often supported by the West. He then shows that the devoutly Islamic yet highly modern Muslims of what he calls the "critical middle"---in Iran, Pakistan, Turkey, and the stealth force behind the extraordinary growth of aggressively capitalist Dubai---are finally the middle class the region has desperately needed. They are building a whole new economy, as the middle classes did in both India and China, and their distinctive blending of Islam and capitalism is the key to bringing about lasting reform and to defeating fundamentalism. They are people in the region the West can and must do business with.

Forces of Fortune offers a transformative understanding of the Muslim world and its possible future that is sure to spark lively debate and to play a vital role in bringing about a sea change in thinking about the conflict with Islam.

Born in Iran, Vali Nasr is a professor of international relations at the Fletcher School of Law and Diplomacy of Tufts University and the author of the New York Times bestseller The Shia Revival.

More about Vali Nasr
Forces of Fortune
Copy and paste the code into your website.
New here? Learn how to read digital books for free