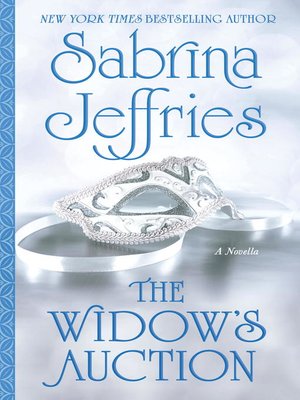 View more libraries...
From Sabrina Jeffries—New York Times bestselling author of The Study of Seduction and The Art of Sinning—comes a sumptuous tale of a woman whose affection comes at a price...

Though Isobel Lamberton, the widowed Lady Kingsley, is confounded by her dealings with the obstinate Justin Antony, Lord Warbrooke, his commanding presence sparks something deep within her. But such romantic thoughts are for naught. For Justin’s political aspirations always come first. And Isobel’s own secret past could damage both of them permanently.

So when Isobel’s friend talks her into participating in a scandalous auction of masked widows at a gentleman’s club, she reluctantly agrees...and soon begins to relish being an object of desire. But none desire her more than Justin, who recognizes the outspoken Isobel in disguise and sets out to teach her a lesson worth far more than money...

"Jeffries's talent is clear, and readers will delight in the multidimensional characters, fast-paced plot, and heaps of emotional passion and sensuality."—Publishers Weekly

"With every book, Jeffries grows into an even more accomplished writer."—RT Book Reviews