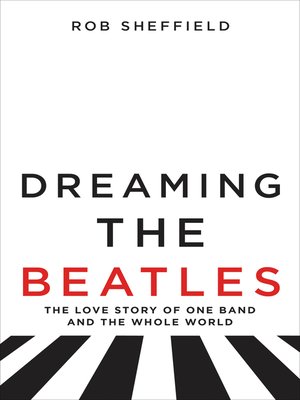 The Love Story of One Band and the Whole World

Winner of the 2017 Virgil Thomson Award for Outstanding Music Criticism

"This is the best book about the Beatles ever written" —Mashable

Rob Sheffield, the Rolling Stone columnist and bestselling author of Love Is a Mix Tape offers an entertaining, unconventional look at the most popular band in history, the Beatles, exploring what they mean today and why they still matter so intensely to a generation that has never known a world without them.

Dreaming the Beatles is not another biography of the Beatles, or a song-by-song analysis of the best of John and Paul. It isn't another exposé about how they broke up. It isn't a history of their gigs or their gear. It is a collection of essays telling the story of what this ubiquitous band means to a generation who grew up with the Beatles music on their parents' stereos and their faces on T-shirts. What do the Beatles mean today? Why are they more famous and beloved now than ever? And why do they still matter so much to us, nearly fifty years after they broke up?

As he did in his previous books, Love is a Mix Tape, Talking to Girls About Duran Duran, and Turn Around Bright Eyes, Sheffield focuses on the emotional connections we make to music. This time, he focuses on the biggest pop culture phenomenon of all time—The Beatles. In his singular voice, he explores what the Beatles mean today, to fans who have learned to love them on their own terms and not just for the sake of nostalgia.

Dreaming the Beatles tells the story of how four lads from Liverpool became the world's biggest pop group, then broke up—but then somehow just kept getting bigger. At this point, their music doesn't belong to the past—it belongs to right now. This book is a celebration of that music, showing why the Beatles remain the world's favorite thing—and how they invented the future we're all living in today.

Rob Sheffield is a columnist for Rolling Stone, where he has been writing about music, TV, and pop culture since 1997. He is the author of the national bestsellers Love Is a Mix Tape: Love and Loss, One Song at a Time and Talking to Girls About Du...

More about Rob Sheffield
Dreaming the Beatles
Copy and paste the code into your website.
New here? Learn how to read digital books for free