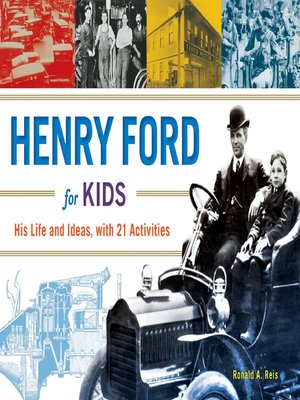 His Life and Ideas, with 21 Activities · For Kids

by Ronald A. Reis

Detailing Henry Ford's childhood as a precocious farm-boy mechanic, his revolutionary labor and production ideas, and the lasting legacy of his widespread philanthropy, author Ronald A. Reis also does not shy away from his eccentricities. The issues that stirred controversy are discussed, such as the industrialist's anti-Semitic views and his pacifist beliefs. Packed with historic photos and illuminating sidebars, Henry Ford for Kids brings the turn of the 20th century to life, touching on related topics such as the popularity of "auto polo," the Great War, and the life of industrial architect Albert Kahn. Twenty-one hands-on activities encourage budding innovators to apply engineering and production ideas and learn more about the era as kids will build a lemon-powered battery, make a moving assembly line, learn to dance the waltz, design an automobile dashboard, and much more.

Ronald A. Reis is the author of Christopher Columbus and the Age of Exploration for Kids, The US Congress for Kids, and more than a dozen other nonfiction books for young adults. His biography of Buffalo Bill Cody won the 2011 Spur Award for the b...

More about Ronald A. Reis
Henry Ford for Kids
Copy and paste the code into your website.
New here? Learn how to read digital books for free