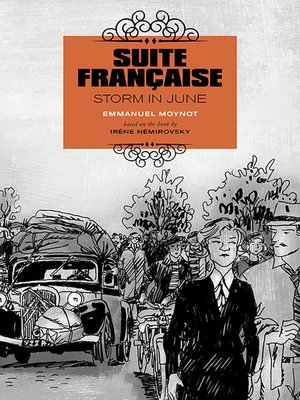 Suite Française, an extraordinary novel about village life in France just as it was plunged into chaos with the German invasion of 1940, was a publishing sensation ten years ago; Irène Némirovsky completed the two-volume book, part of a planned larger series, in the early 1940s before she was arrested in France and eventually sent to Auschwitz, where she died. The notebook containing the novels was preserved by her daughters but not examined until 1998; it was finally published in France in 2004 and became a huge international bestseller, including in the US, where it has sold over one million copies.

This dramatic and stirring graphic novel, translated from the French and faithful to the spirit of Némirovsky's story, focuses on Book 1, entitled "Storm in June," in which a disparate group of Paris citizens flees the city ahead of the advancing German troops. However, their orderly plans to escape are eclipsed by the chaos spreading across the country, and their sense of civility and well-being is replaced by a raw desire to survive.

Emmanuel Moynot is a graphic artist and the author of more than forty graphic novels published in France.