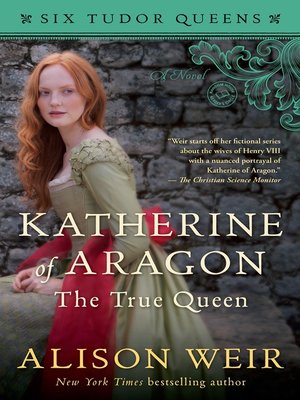 Katherine of Aragon, the True Queen

FictionLiteratureHistorical Fiction
Bestselling author and acclaimed historian Alison Weir takes on what no fiction writer has done before: creating a dramatic six-book series in which each novel covers one of King Henry VIII's wives. In this captivating opening volume, Weir brings to life the tumultuous tale of Katherine of Aragon, Henry's first, devoted, and "true" queen.

A princess of Spain, Catalina is only sixteen years old when she sets foot on the shores of England. The youngest daughter of the powerful monarchs Ferdinand and Isabella, Catalina is a coveted prize for a royal marriage—and Arthur, Prince of Wales, and heir to the English throne, has won her hand. But tragedy strikes and Catalina, now Princess Katherine, is betrothed to the future Henry VIII. She must wait for his coming-of-age, an ordeal that tests her resolve, casts doubt on her trusted confidantes, and turns her into a virtual prisoner.

Katherine's patience is rewarded when she becomes Queen of England. The affection between Katherine and Henry is genuine, but forces beyond her control threaten to rend her marriage, and indeed the nation, apart. Henry has fallen under the spell of Katherine's maid of honor, Anne Boleyn. Now Katherine must be prepared to fight, to the end if God wills it, for her faith, her legitimacy, and her heart.
Praise for Katherine of Aragon, The True Queen

"Alison Weir starts off her fictional series about the wives of Henry VIII with a nuanced portrayal of Katherine of Aragon."—The Christian Science Monitor

"Weir is excellent on the little details that bring a world to life."—The Guardian
"As always, Weir demonstrates a keen eye for crafting dramatic scenes of beautiful, accurate detail, instilling in the reader a vivid sense of being there. . . . If this greatly impressive inaugural installment is any indication, Tudor lovers have much to look forward to."—Booklist (starred review)

"Vividly detailed . . . Weir brings considerable expertise to her fictional retelling of the life of Katherine of Aragon. . . . [The author] portrays her sympathetically as both credulous and steely."—Kirkus Reviews

"An illuminating and engaging portrait of 'the true queen.'"—Historical Novels Review

"[Weir's] fresh approach to Henry's first wife [is] a wonderful place to start for those unfamiliar with Katherine's story. Weir's portrayal is far from that of a weak, victimized woman, but one of a courageous, strong, devoted queen fighting for her life and rights. An easy, quick read to begin the series."—RT Book Reviews
"In this first novel of the Six Tudor Queens series, Alison Weir dazzlingly brings Katherine of Aragon to life. Based on extensive new research, it is a portrayal that shatters the many myths about Henry VIII's long-suffering first wife. Far from being the one-dimensional victim of history, she emerges as a charismatic, indomitable, and courageous heroine whose story never fails to enthrall."—Tracy Borman, author of Thomas Cromwell

"Yet again, Alison Weir has managed to intertwine profound historical knowledge with huge emotional intelligence, to compose a work that throws light on an endlessly fascinating figure. But her real gift in all of this is making it feel so fresh and alive."—Charles Spencer, author of Killers of the King
FictionLiteratureHistorical Fiction

Alison Weir is the New York Times bestselling author of the novels The Marriage Game, A Dangerous Inheritance, Captive Queen, The Lady Elizabeth, and Innocent Traitor and numerous historical biographies, including The Lost Tudor Princess, Elizabet...

More about Alison Weir
Katherine of Aragon, the True Queen
Copy and paste the code into your website.
New here? Learn how to read digital books for free