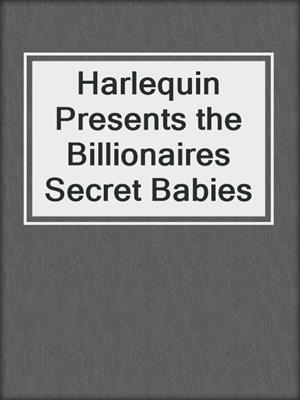 How will these bachelor billionaires react when the pregnancy test unexpectedly turns up positive? Find out in this secret baby box set featuring USA TODAY bestselling Harlequin Presents authors!

Pregnancy of Passion by Lucy Monroe

Their tempestuous affair ended years ago, but Salvatore di Vitale is back and the chemistry between him and Elisa is as explosive as ever. When passion leads to pregnancy, Salvatore must claim his heir!

Secrets of the Oasis by Abby Green

Sheikh Salman can have anything he wants and he wants beautiful Jamilah. When she returns to his desert kingdom, he spirits her off to an oasis where their passionate reconciliation has everlasting consequences...

Sheikh Khalid Bin Shareef has always vowed not to get entangled with virgins. But innocent Maggie Lewis is too hard to resist. Then they find their red-hot night had unexpected repercussions that only marriage can solve.

One Night-Baby by Susan Stephens

When sweet Kate Mulhoon met top Hollywood producer Santino Rossi she was swept away by his fiery desire. He knew nothing of her innocence, or of the baby they made that night...until Kate appeared on his film set in Rome, five years later...

Susan Stephens is passionate about writing books set in fabulous locations where an outstanding man comes to grips with a cool, feisty woman. Susan's hobbies include travel, reading, theatre, long walks, playing the piano, and she loves hearing fr...

Annie West has devoted her life to an intensive study of tall, dark, charismatic heroes who cause the best kind of trouble in the lives of their heroines. As a sideline she researches locations for romance, from vibrant cities to desert encampment...

Harlequin Presents the Billionaires Secret Babies
Copy and paste the code into your website.
New here? Learn how to read digital books for free