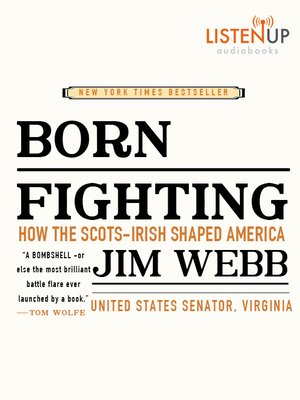 Presidential Candidate Jim Webb's Born Fighting is the first book to chronicle the full journey of this remarkable cultural group, and the profound, but unrecognized role it played in the shaping of America. Written with the storytelling verve that has earned his works such acclaim as "captivating, unforgettable" (the Wall Street Journal on Lost Soldiers), Scots-Irishman Jim Webb, Vietnam combat veteran and former Naval Secretary, traces the history of his people, beginning nearly two thousand years ago at Hadrian's Wall, when the nation of Scotland was formed north of the Wall through armed conflict in contrast to England's formation to the south through commerce and trade. Webb recounts the Scots' odyssey and their clashes with the English in Scotland and then in Ulster, their retreat from one war-ravaged land to another. Through engrossing chronicles of the challenges the Scots-Irish faced, Webb vividly portrays how they developed the qualities that helped settle the American frontier and define the American character.