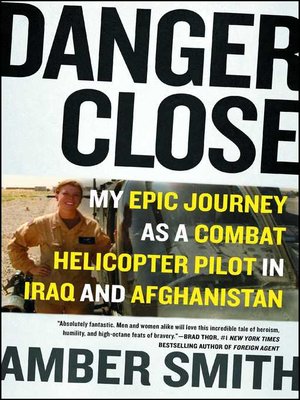 View more libraries...
Inspiring and "riveting...vivid and harrowing" (Sean Parnell, author of Outlaw Platoon), Danger Close is the first memoir of active combat by a female helicopter pilot in Iraq and Afghanistan. New York Times bestselling author Brad Thor raves, "Men and women alike will love this incredible tale of heroism, humility, and high-octane feats of bravery."
Amber Smith flew into enemy fire in some of the most dangerous combat zones in the world. One of only a few women to fly the Kiowa Warrior helicopter—whose mission, armed reconnaissance, required its pilots to stay low and fly fast, perilously close to the fight—Smith deployed to Iraq and Afghanistan and rose to Pilot-in-Command and Air Mission Commander in the premier Kiowa unit in the Army. She learned how to perform and survive under extreme pressure, both in action against an implacable enemy and within the elite "boy's club" of Army aviation.

In Danger Close, Smith "covers each mission with edge-of-your-seat detail and a coolness that demonstrates how she gained the respect of fellow pilots and soldiers on the ground" (Library Journal). Smith's unrelenting fight for both mastery and respect delivers universal life-lessons that will be useful to any civilian, from "earning your spurs" as a newbie to "embracing the suck" through setbacks that challenge your self-confidence to learning to trust your gut as a veteran of your profession.

Intensely personal, cinematic, poignant, and inspiring, Danger Close is "the captivating story of one woman's fight to serve her country in the direct line of danger" (Dana Perino, co-host of The Five on Fox News).