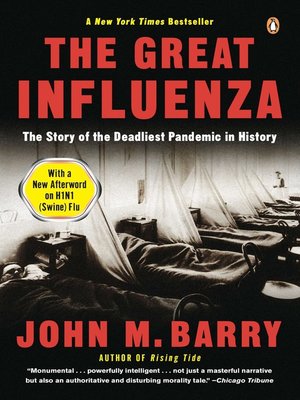 MedicalNonfiction
In the winter of 1918, at the height of World War I, history's most lethal influenza virus erupted in an army camp in Kansas, moved east with American troops, then exploded, killing as many as 100 million people worldwide. It killed more people in twenty-four weeks than AIDS has killed in twenty-four years, more in a year than the Black Death killed in a century. But this was not the Middle Ages, and 1918 marked the first collision between modern science and epidemic disease. Magisterial in its breadth of perspective and depth of research, THE GREAT INFLUENZA weaves together multiple narratives, with characters ranging from William Welch, founder of the Johns Hopkins Medical School, to John D. Rockefeller and Woodrow Wilson. Ultimately a tale of triumph amid tragedy, this crisis provides us with a precise and sobering model as we confront the epidemics looming on our own horizon.
From the Compact Disc edition.
MedicalNonfiction

John M. Barry is the author of the New York Times bestselling The Great Influenza and the prizewinning history Rising Tide: The Great Mississippi Flood of 1927 and How It Changed America. He divides his time between New Orleans, Louisiana, and Was...

More about John M. Barry
The Great Influenza
Copy and paste the code into your website.
New here? Learn how to read digital books for free