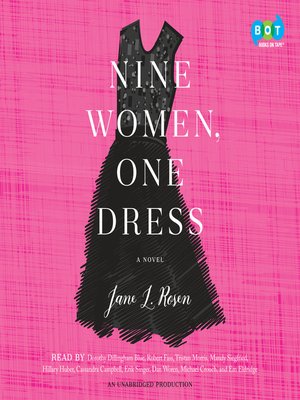 FictionLiteratureRomanceHumor (Fiction)
A charming, hilarious, irresistible romp of a novel that brings together nine unrelated women, each touched by the same little black dress that weaves through their lives, bringing a little magic with it.
Natalie is a Bloomingdale's salesgirl mooning over her lawyer ex-boyfriend who's engaged to someone else after just two months. Felicia has been quietly in love with her boss for seventeen years and has one night to finally make the feeling mutual. Andie is a private detective who specializes in gathering evidence on cheating husbands—a skill she unfortunately learned from her own life—and lands a case that may restore her faith in true love. For these three women, as well as half a dozen others in sparkling supporting roles—a young model fresh from rural Alabama, a diva Hollywood star making her Broadway debut, an overachieving, unemployed Brown grad who starts faking a fabulous life on social media, to name just a few—everything is about to change, thanks to the dress of the season, the perfect little black number everyone wants to get their hands on . . .
Cast of Narrators:
Robert Fass
Dorothy Dillingham
Tristan Morris
Mandy Siegfried
Hillary Huber
Cassandra Campbell
Erik Singer
Dan Woren
Michael Crouch
Em Eldridge
From the Compact Disc edition.
FictionLiteratureRomanceHumor (Fiction)

JANE L. ROSEN is an author and Huffington Post contributor. She lives in New York City and Fire Island with her husband and three daughters. She often takes inspiration from the city she lives in and the people she shares it with. She is the autho...

More about Jane L. Rosen
Nine Women, One Dress
Copy and paste the code into your website.
New here? Learn how to read digital books for free