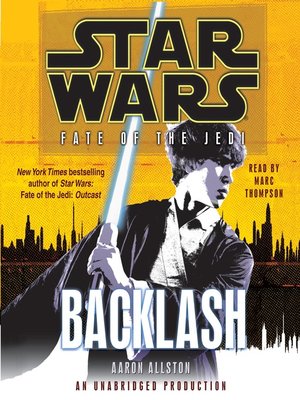 FictionScience FictionThriller
Repercussions from the dark side's fatal seduction of Jacen Solo and the mysterious plague of madness afflicting young Jedi continue to wreak havoc galaxy-wide. Luke and Ben Skywalker are in pursuit of the now masterless Sith apprentice Vestara Khai. It is a chase that leads to the forbidding planet Dathomir.
Meanwhile, Han and Leia Solo are on their own desperate mission, shuttling madness-stricken Jedi from Coruscant to safe haven in the Transitory Mists—and beyond the grasp of Galactic Alliance Chief of State Natasi Daala. But the bold maneuver only intensifies Daala's fury.
Yet no greater threat exists than that which still waits in the depths of the distant Maw Cluster: A being of pure, ravenous dark-side energy named Abeloth calls out across the stars to Jedi and Sith alike. For some it may be the ultimate source of answers crucial to their survival. For others it could be the ultimate weapon of conquest. But for all, it is a game-changing—and life-altering—encounter and a tactical gambit with unimaginable consequences.
FictionScience FictionThriller

More about Aaron Allston
Backlash
Copy and paste the code into your website.
New here? Learn how to read digital books for free