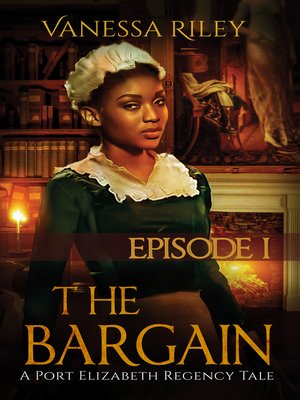 FictionRomanceHistorical Fiction
Coming to London has given Precious Jewell a taste of freedom, and she will do anything, bear anything, to keep it. Defying her master is at the top of her mind, and she won't let his unnerving charm sway her. Yet, will her restored courage lead her to forsake a debt owed to the grave and a child who is as dear to her as her own flesh?Gareth Conroy, the third Baron Welling, can neither abandon his upcoming duty to lead the fledgling colony of Port Elizabeth, South Africa nor find the strength to be a good father to his heir. Every look at the boy reminds him of the loss of his wife. Guilt over her death plagues his sleep, particularly when he returns to London. Perhaps the spirit and fine eyes of her lady's maid, Precious Jewell, might offer the beleaguered baron a new reason to dream.The Bargain is a serialized story or soap opera told in episodes. Each episode averages from three to eight chapters, about 15,000 to 30,000 words. Each episode resolves one issue. Emotional cliffhangers may be offered, but the plot, the action of the episode, will be complete in resolving the main issue.My promise to you is that the action will be compelling, and I will tell you in the forward the length of the episode. This episode, Episode I, is four chapters long, 15,000 words. Enjoy these Regency Tales set in South Africa.—VRThe Bargain is the first Port Elizabeth Regency Tale. Episode 1: A Bargain to Be Free
FictionRomanceHistorical Fiction

Even as she pursued engineering degrees, Vanessa Riley's love of 19th century history yielded a hunger to take as many Western Civilization credits as possible (two classes shy of a minor). Vanessa adores Regency times with its conflicts between C...

More about Vanessa Riley
The Bargain
Copy and paste the code into your website.
New here? Learn how to read digital books for free