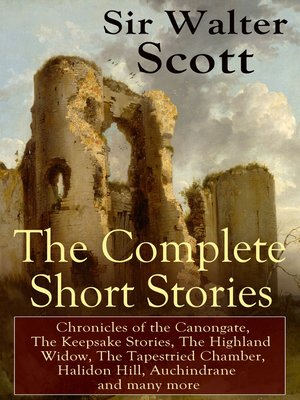 Chronicles of the Canongate, The Keepsake Stories, The Highland Widow, The Tapestried Chamber, Halidon Hill, Auchindrane and many more: From the Great Scottish Writer, Author of Waverly, Rob Roy, Ivanhoe, The Pirate, Old Mortality, The Guy Mannering,

FictionRomanceThrillerHistorical Fiction
This carefully crafted ebook: "The Complete Short Stories of Sir Walter Scott: Chronicles of the Canongate, The Keepsake Stories, The Highland Widow, The Tapestried Chamber, Halidon Hill, Auchindrane and many more" is formatted for your eReader with a functional and detailed table of contents. Sir Walter Scott (1771-1832) was a Scottish historical novelist, playwright and poet. He was the first modern English-language author to have a truly international career in his lifetime, with many contemporary readers in Europe, Australia, and North America. His novels and poetry are still read, and many of his works remain classics of both English-language literature and of Scottish literature. Famous titles include Ivanhoe, Rob Roy, The Lady of the Lake, Waverley, The Heart of Midlothian and The Bride of Lammermoor. Table of Contents: INTRODUCTION: Famous Authors on Scott SIR WALTER SCOTT AND LADY MORGAN by Victor Hugo MEMORIES AND PORTRAITS by Robert Louis Stevenson SCOTT AND HIS PUBLISHERS by Charles Dickens SHORT STORIES: Chronicles of the Canongate CHRONICLES OF THE CANONGATE - INTRODUCTORY THE HIGHLAND WIDOW THE TWO DROVERS THE SURGEON'S DAUGHTER The Keepsake Stories MY AUNT MARGARET'S MIRROR THE TAPESTRIED CHAMBER DEATH OF THE LAIRD'S JOCK Other Short Stories CHRISTOPHER CORDUROY PHANTASMAGORIA THE INFERNO OF ALTISIDORA A HIGHLAND ANECDOTE DEPRAVITY AMONG ANIMALS BIOGRAPHY: SIR WALTER SCOTT by George Saintsbury SIR WALTER SCOTT by Richard H. Hutton MEMOIRS OF THE LIFE OF SIR WALTER SCOTT by J. G. Lockhart
FictionRomanceThrillerHistorical Fiction

The Complete Short Stories of Sir Walter Scott
Copy and paste the code into your website.
New here? Learn how to read digital books for free