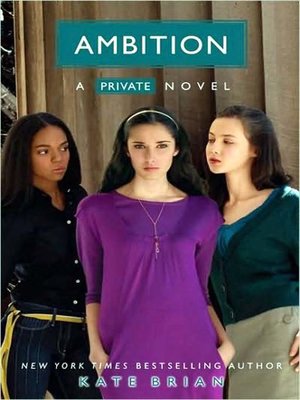 The higher you climb, the farther you have to fall....Reed Brennan knew being elected president of exclusive Billings Hall would change her life. What she didn't count on was being dumped by her boyfriend, Josh Hollis, or being held responsible for a fire that destroyed Easton Academy's oldest building.

And now the administration wants to shut Billings down. Forever.

As president, it's up to Reed to save Billings Hall. What better way to win over the headmaster than to host a glam fund-raising event in New York City? Everyone needs a date, and the newly single Reed is the most eligible girl on campus. All of Easton's hottest boys are angling to take her out, and for once, Reed's biggest problem is which one to choose.

Reed has never felt so popular or powerful---until the police start asking questions about Cheyenne Martin's death. Excited party buzz quickly turns to whispered rumors and dark moods, and one thing becomes clear: There is someone who wants to see Billings, and Reed, go down. And they will do anything to make it happen.

Kieran Scott writes under the pen name Kate Brian, whose best-known books are The Princess and the Pauper, Megan Meade's Guide to the McGowan Boys, Fake Boyfriend, and the bestselling Private series.

More about Kate Brian
Ambition
Copy and paste the code into your website.
New here? Learn how to read digital books for free