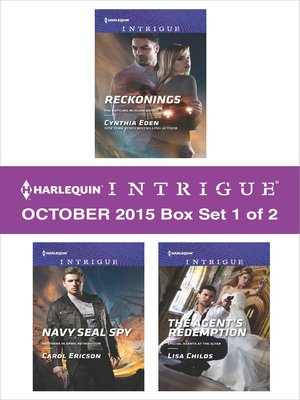 RECKONINGS
The Battling McGuire Boys
by Cynthia Eden
Dr. Jamie Myers has hired fierce ex-SEAL Davis McGuire for protection from her dark past, but she didn't anticipate just how close she would get to her new bodyguard—because Davis is determined to protect Jamie both day...and night.

NAVY SEAL SPY
Brothers in Arms: Retribution
by Carol Ericson
Fresh out of the navy, Liam McCabe's first mission is straightforward—infiltrate then expose the criminal organization Tempest. But then he runs into Katie O'Keefe. Now he's engaged in a high-stakes game of espionage with the one woman who can blow his cover.

THE AGENT'S REDEMPTION
Special Agents at the Altar
by Lisa Childs
When The Bride Butcher strikes again, FBI agent Jared Bell will stop at nothing to bring closure to the case—including staging an engagement with Rebecca Drummond, the first victim's sister, to lure the madman into a trap...

Look for 6 compelling new stories every month from Harlequin® Intrigue!

Ever since Lisa Childs read her first romance novel (a Harlequin of course) at age eleven, all she ever wanted to be was a romance writer. Now an award winning, best-selling author of nearly fifty novels for Harlequin, Lisa is living the dream. L...

Cynthia Eden is a New York Times and USA Today best-selling author. She writes dark tales of romantic suspense and paranormal romance. Her books have received starred reviews from Publishers Weekly, and was named a 2013 RITA® finalist for best rom...

Carol Ericson lives in southern California, home of state-of–the-art cosmetic surgery, wild freeway chases, and a million amazing stories. These stories, along with hordes of virile men and feisty women clamor for release from Carol's head until ...

More about Carol Ericson
Harlequin Intrigue October 2015, Box Set 1 of 2
Copy and paste the code into your website.
New here? Learn how to read digital books for free