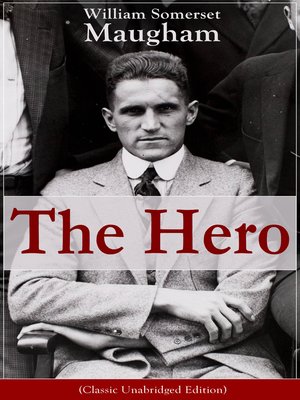 One of the first novels by a prolific British Playwright, Novelist and Short Story writer, author of "The Painted Veil", "Of Human Bondage", "Cakes and Ale", "The Magician" and "The Moon and Sixpence"

FictionLiteratureRomance
This carefully crafted ebook: "The Hero (Classic Unabridged Edition)" is formatted for your eReader with a functional and detailed table of contents. William Somerset Maugham (1874-1965) was a British playwright, novelist and short story writer. He was among the most popular writers of his era and reputedly the highest paid author during the 1930s. Excerpt: "But human sorrow is like water in an earthen pot. Little by little Colonel Parsons forgot his misery; he had turned it over in his mind so often that at last he grew confused. It became then only a deep wound partly healed, scarring over; and he began to take an interest in the affairs of the life surrounding him. He could read his paper without every word stabbing him by some chance association; and there is nothing like the daily and thorough perusal of a newspaper for dulling a man's brain. He pottered about his garden gossiping with the gardener; made little alterations in the house—bricks and mortar are like an anodyne; he collected stamps; played bezique with his wife; and finally, in his mild, gentle way, found peace of mind...."
FictionLiteratureRomance

The Hero (Classic Unabridged Edition)
Copy and paste the code into your website.
New here? Learn how to read digital books for free