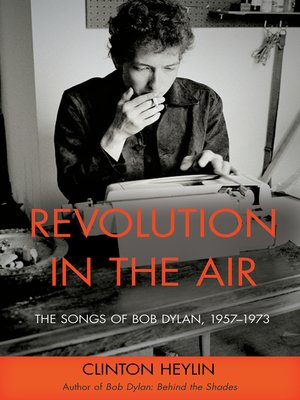 Revolution in the Air

By far the most comprehensive book on Dylan's words ever written, including a number of songs that no one has ever heard, this first volume will fundamentally change how these lyrics are interpreted and understood. Arranged in a surprising chronology of when they were actually written rather than when they appeared on albums—the middle verse of “Blowin' in the Wind" was written much later than the first and third verses, and the songs on John Wesley Harding were written prior to some of the songs on The Basement Tapes—hundreds of surprising facts are uncovered in this catalog of 300 songs, spanning his career up prior to Blood on the Tracks. Newly discovered manuscripts, anecdotal evidence, and a seemingly limitless knowledge of every Bob Dylan live performance contribute to this definitive resource of the words of a celebrated American singer-songwriter.

Clinton Heylin is the author of Bob Dylan: Behind the Shades, Bob Dylan: The Recording Sessions, Can You Feel the Silence: Van Morrison, From the Velvets to the Voidoids: The Birth of American Punk, and several other books.

More about Clinton Heylin
Revolution in the Air
Copy and paste the code into your website.
New here? Learn how to read digital books for free