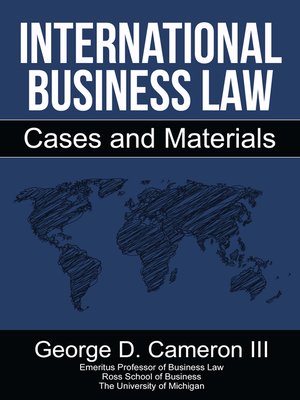 BusinessNonfiction
Uncounted millions of "international" transactions occur daily, as goods and services are purchased across the national boundaries of some 200 political units. Capital flows from nation to nation, and so—to a lesser extent—do jobs, as companies seek more favorable locations for their business operations. The "rules" (laws) governing these exchanges quickly become complex, as persons (and governments) from different countries are involved. If problems arise in a cross-border relationship, whose rules apply? What forums are available to resolve disputes? Are there tax implications to the transaction? If so, where? These and similar questions need to be factored into the decision to "go overseas." This timely and useful book on international business law addresses all of these issues, and more.Each of the six Chapters begins with a brief overview of the subject-matter, followed by short previews of the chosen case examples. The primary content of the Chapters consists of some 120 court and arbitration decisions in real disputes, between real parties. The actual texts of the decisions in these cases have been edited; some excerpts are quite brief, others are more substantial. Most "background" facts have been summarized by the author, but the edited-decision part of each case is quoted from the actual recorded text of the court or arbitrator who decided it. Clearly, a minute sample from tens of thousands of cases cannot provide comprehensive coverage of what all the world's legal rules are. Our objectives here are simply to indicate some of the major potential "flash points" of doing international business, to illustrate some of the significant differences in the applicable legal rules, and to provide an exposure to the language and process by which international business disputes are resolved. "Fore-warned is fore-armed." Being aware of these potential trouble spots, a sensible business manager will presumably consider them in making the decision to engage in cross-border transactions, and take appropriate steps to avoid or minimize potential adverse consequences.Chapter I introduces International Law—its course of development and its two major sources (custom and treaties). Chapter II examines the use of national and international courts and arbitrators to resolve cross-border disputes. Chapter III provides basic coverage of the United Nations Convention on Contracts for the International Sale of Goods: when it applies; how the sale contract is formed; when risk of loss on the goods passes from Seller to Buyer; what responsibilities the Seller has for the quality of the goods sold. Chapter IV looks at some of the legal questions that may arise in conducting cross-border commercial operations—employment issues, intellectual property issues, and investment issues. Chapter V considers potential questions regarding taxation of international activities, and the regulation of adverse environmental effects. Chapter VI reviews the efforts by national governments to apply their competition regulations to international business transactions, and the difficulties that private parties may have in attempting to enforce legal claims against governments and their agencies. While these are surely not the only legal issues that may arise in connection with international business, they do constitute a significant set of concerns of which managers need to be aware as they venture into the international "stream of commerce."
BusinessNonfiction