This Is Not My Life

ebook ∣ The Story of My Prison Years 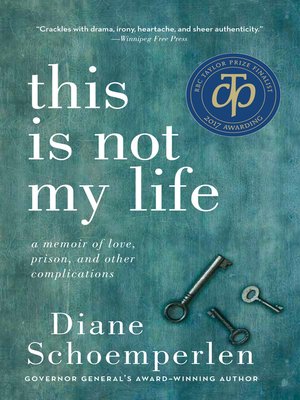 From the Governor General's Award winning author of Forms of Devotion, Our Lady of the Lost and Found and By the Book

"Never once in my life had I dreamed of being in bed with a convicted killer."

For almost six turbulent years, award-winning writer Diane Schoemperlen was involved with a prison inmate serving a life sentence for second-degree murder. The relationship surprised no one more than her. How do you fall in love with a man with a violent past? How do you date someone who is in prison? This Is Not My Life is the story of the romance between Diane and Shane—how they met and fell in love, how they navigated passes and parole and the obstacles facing a long-term prisoner attempting to return to society, and how, eventually, things fell apart. While no relationship takes place in a vacuum, this is never more true than when that relationship is with a federal inmate. In this candid, often wry, sometimes disturbing memoir, Schoemperlen takes us inside this complex and difficult relationship as she journeys through the prison system with Shane. Not only did this relationship enlarge her capacity for both empathy and compassion, but it also forced her to more deeply examine herself.

Biography & Autobiography Nonfiction
This Is Not My Life
New here? Learn how to read digital books for free