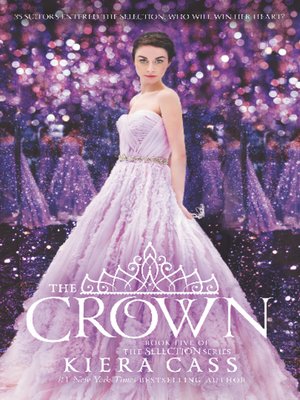 Kiera Cass's #1 New York Times bestselling Selection series has captured the hearts of readers from its very first page. Now the end of the journey is here. Prepare to be swept off your feet by The Crown—the eagerly awaited, wonderfully romantic fifth and final book in the Selection series.

In The Heir, a new era dawned in the world of The Selection. Twenty years have passed since America Singer and Prince Maxon fell in love, and their daughter is the first princess to hold a Selection of her own.

Eadlyn didn't think she would find a real partner among the Selection's thirty-five suitors, let alone true love. But sometimes the heart has a way of surprising you...and now Eadlyn must make a choice that feels more difficult—and more important—than she ever expected.

Don't miss The Betrothed, a glittering royal romance sure to captivate Kiera Cass's legion of loyal readers and lovers of courtly intrigue alike!

Kiera Cass is the #1 New York Times bestselling author of the Selection series and The Siren. She is a graduate of Radford University and currently lives in Christiansburg, Virginia, with her family. You can learn more about Kiera's books, videos,...

More about Kiera Cass
The Crown
Copy and paste the code into your website.
New here? Learn how to read digital books for free