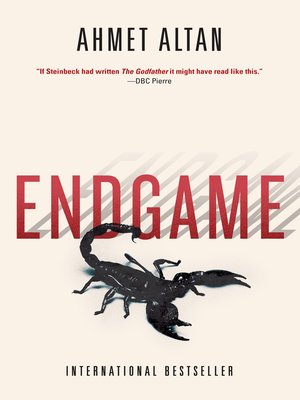 The worldwide English debut of the million-copy-bestselling Turkish author

Bestselling Turkish author Ahmet Altan released his new novel, Endgame, in 2013, and sold hundreds of thousands of copies within the first weeks of publication. His previous novel, The Longest Night, published nine years earlier, sold one million copies in Turkey alone. With this English-language publication of Endgame, HarperCollins joins with international publishers to bring this masterful novelist to English readers for the first time.

In this sweeping story, a novelist travels to a small town near the coast to write a murder mystery and instead, through a series of twists and turns, becomes a murderer himself. Over the course of one night, he reveals what drove him to murder, including a love affair, a dangerous friendship with the town's mayor, and an unwitting involvement in the power struggle among the townsfolk who believe that treasure is buried in the nearby hills. As with all of Altan's work, the story is rife with fear, courage, evil, virtue, loyalty, betrayal, pleasure, sins, sex, dreams and solitude, all drawing us back to the power of the written word and the complexity of human relationships.