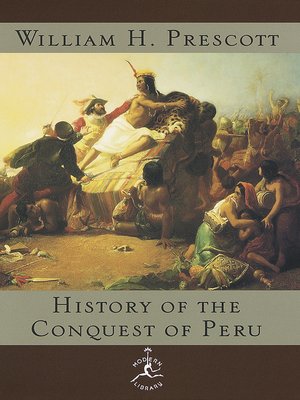 The History of the Conquest of Peru

HistoryPoliticsNonfiction
Originally published in 1847, History of the Conquest of Peru, a companion volume to William H. Prescott's masterly History of the Conquest of Mexico, continues his vivid chronicle of Spanish exploits in the New World. The book's commanding vision of Pizarro's tumultuous overthrow of the Inca empire has secured its reputation as a classic in the literature of Latin American history.

'History of the Conquest of Peru represents an author's triumph over his materials,' observed Donald G. Darnell, one of the historian's several biographers. 'Prescott exploits to the fullest any opportunities for dramatic effects that history might provide him. . . . If there is one [distinguishing] feature of the Conquest of Peru . . . it is the portrayal of the Spanish character, that striking fusion of courage, cruelty, pride, and gallows humor. . . . We seem to be overhearing dialogue and observing firsthand the interaction between the Spaniards as they struggle for control of an empire. . . . Although Peru lacks a noble protagonist . . . it is still an immensely readable history. The description of the Inca civilization, particularly its wealth, the precise explanation of the cause of the conflict between the conquerors, and the depiction of the Spanish character--these together with the careful research, the sheer abundance of anecdotes, and the exploitation of primary materials all contribute to the history's continuing popularity.'
HistoryPoliticsNonfiction

William Hickling Prescott, the renowned American historian who chronicled the rise and fall of the Spanish empire, was born in Salem, Massachusetts, on May 4, 1796. His grandfather had commanded colonial forces at the Battle of Bunker Hill during ...

More about William H. Prescott
The History of the Conquest of Peru
Copy and paste the code into your website.
New here? Learn how to read digital books for free