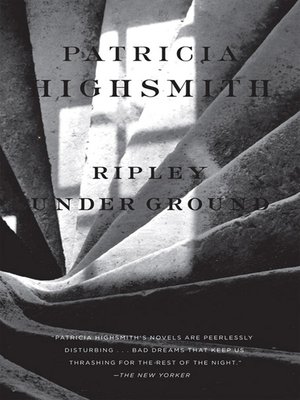 "Ripley is an unmistakable descendant of Gatsby, that 'penniless young man without a past' who will stop at nothing."—Frank Rich

Now part of American film and literary lore, Tom Ripley, "a bisexual psychopath and art forger who murders without remorse when his comforts are threatened" (New York Times Book Review), was Patricia Highsmith's favorite creation. In these volumes, we find Ripley ensconced on a French estate with a wealthy wife, a world-class art collection, and a past to hide. In Ripley Under Ground (1970), an art forgery goes awry and Ripley is threatened with exposure; in The Boy Who Followed Ripley (1980), Highsmith explores Ripley's bizarrely paternal relationship with a troubled young runaway, whose abduction draws them into Berlin's seamy underworld; and in Ripley Under Water (1991), Ripley is confronted by a snooping American couple obsessed with the disappearance of an art collector who visited Ripley years before. More than any other American literary character, Ripley provides "a lens to peer into the sinister machinations of human behavior" (John Freeman, Pittsburgh Gazette).