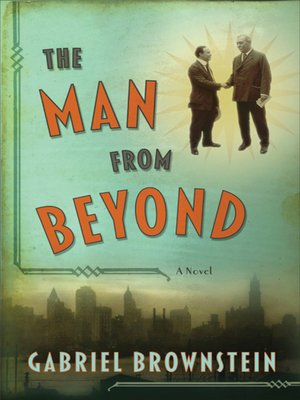 The Man from Beyond

From the winner of the PEN/Hemingway Award, a debut novel featuring Harry Houdini and Sir Arthur Conan Doyle.It is April 1922. Sir Arthur Conan Doyle arrives in New York on a spiritualist crusade. To packed houses at Carnegie Hall, he displays photographs of ghosts and spirits; of female mediums bound and gagged, ectoplasmic goo emerging from their bodies. In the newspapers, he defends the powers of the mysterious Margery, one of the most famous mediums of the day. His good friend Harry Houdini is a skeptic, and when Doyle claims Margery's powers are superior to Houdini's, the magician goes on the attack. Into this mix of spirit-chasing celebrities enters Molly Goodman, a young reporter whose job is to cover the heated debate. As she wanders into this world of spooks and spirits, murder and criminal frauds, Molly discovers herself: her true love, her place in the world; even her relationship to her beloved dead brother, Carl.

More about Gabriel Brownstein
The Man from Beyond
Copy and paste the code into your website.
New here? Learn how to read digital books for free