ebook ∣ The Biography of the Founder of Modern Turkey 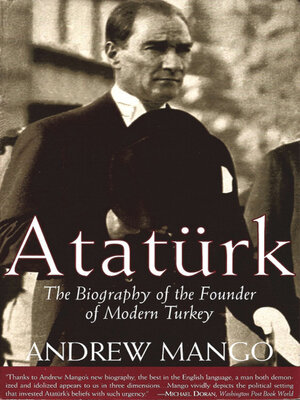 View more libraries...
A "superlative [and] exhaustively researched" biography of "one of the most complex and controversial figures in twentieth-century world history" (Library Journal).
Mustafa Kemal Atatürk was virtually unknown until 1919, when he took the lead in thwarting the victorious Allies' plan to partition the Turkish core of the Ottoman Empire. He divided the Allies, defeated the last Sultan, and secured the territory of the Turkish national state, becoming the first president of the new republic in 1923, fast creating his own legend. This revealing portrait of Atatürk throws light on matters of great importance today—resurgent nationalism, religious fundamentalism, and the reality of democracy.
"One of the world's most respected specialists on Turkey." —The New York Times
"Mango gives this man, one of the least-known nation-builders of the last century, full treatment, from his earliest days to his ascension to power and his death, from cirrhosis at the age of 57. Few leaders have so modernized an ancient society, instituting radical changes in dress, religion, government, education—even the alphabet . . . Mango's admiration for Ataturk doesn't keep him from displaying the dictator's arrogance, ruthlessness and authoritarianism; his Turkish expertise enables him to flesh out Ataturk's complex life via sources he translated himself . . . a rounded, finely detailed portrait." —Publishers Weekly
"Thanks to Andrew Mango's new biography, the best in the English language, a man both demonized and idolized appears to us in three dimensions." —The Washington Post
"A superb biography." —Dallas Morning News
"The best concise account I have ever seen of the decline of the Ottoman Empire. The narrative is gripping." —Geoffrey Lewis, author of Modern Turkey