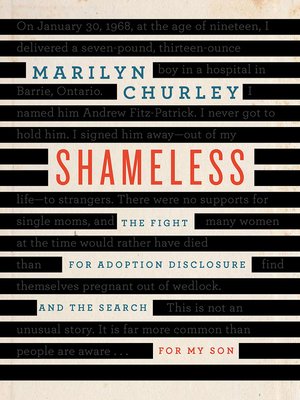 In the late 1960s, at the age of eighteen and living far from home amidst the thriving counterculture of Ottawa, Marilyn Churley got pregnant. Like thousands of other women of the time she kept the event a secret. Faced with few options, she gave the baby up for adoption.

Over twenty years later, as the Ontario NDP government's minister responsible for all birth, death, and adoption records, including those of her own child, Churley found herself in a surprising and powerful position – fully engaged in the long and difficult battle to reform adoption disclosure laws and find her son.

Both a personal and political story, Shameless is a powerful memoir about a mother's struggle with loss, love, secrets, and lies – and an adoption system shrouded in shame.