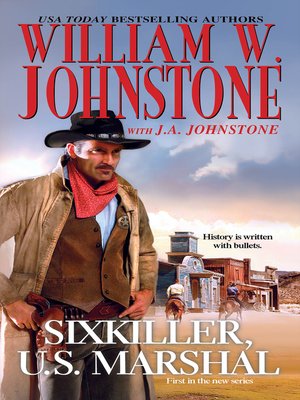 FictionWesternThrillerHistorical Fiction
THE GREATEST WESTERN WRITERS OF THE 21ST CENTURY

In his powerful bestsellers, William W. Johnstone captures the passion and fury of the untamed west. Now, inspired by one of America's most legendary lawmen, he makes history come alive--with a vengeance...

THEY CALLED HIM SIXKILLER
He was born in the Going Snake District of the Cherokee Nation--and forged a destiny as bold as his name. John Henry Sixkiller was as fearless as they come. He fought in the 2nd Cherokee Mounted Rifles, his father's regiment during the Civil War. Served with the Longhorse Police in Indian territory upholding the law among five tribes in a time of violence and change. But now, Sixkiller faces his greatest challenge yet. As a U.S. marshal, he must take on the most notorious outlaws the west has ever seen. Horse thieves who kill without conscience. Train robbers who terrorize the railways. And one ruthless enemy whose bloody reign of fear would bring Sixkiller to the ultimate showdown.

His name means justice. His story is America's.
FictionWesternThrillerHistorical Fiction

More about William W. Johnstone
Sixkiller, U.S. Marshal
Copy and paste the code into your website.
New here? Learn how to read digital books for free