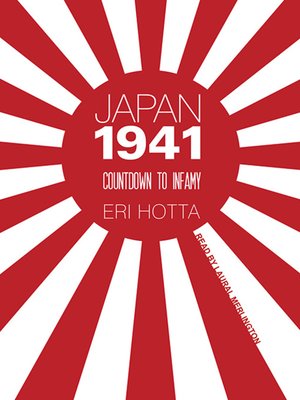 HistoryMilitaryNonfiction
When Japan attacked the United States in 1941, argues Eri Hotta, its leaders, in large part, understood they were entering a conflict they were bound to lose. Availing herself of rarely consulted material, Hotta poses essential questions overlooked by historians in the seventy years since: Why did these men-military men, civilian politicians, diplomats, the emperor-put their country and its citizens in harm's way? Why did they make a decision that was doomed from the start? Introducing us to the doubters, bluffers, and schemers who led their nation into this conflagration, Hotta brilliantly shows us a Japan never before glimpsed-eager to avoid war but fraught with tensions with the West, blinded by traditional notions of pride and honor, nearly escaping disaster before it finally proved inevitable.
HistoryMilitaryNonfiction

Eri Hotta, born in Tokyo and educated in Japan, the United States, and the United Kingdom, has taught at Oxford, in Tokyo, and in Jerusalem, specializing in international relations. She is also the author of Pan-Asianism and Japan's War, 1931-1945.

More about Eri Hotta
Japan 1941
Copy and paste the code into your website.
New here? Learn how to read digital books for free