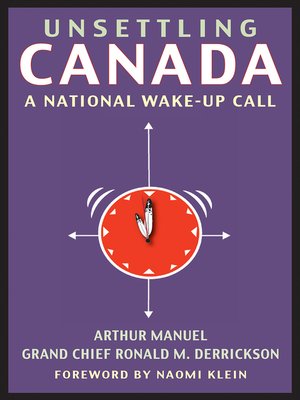 Both men have served as chiefs of their bands in the B.C. interior and both have gone on to establish important national and international reputations. But the differences between them are in many ways even more interesting. Arthur Manuel is one of the most forceful advocates for Aboriginal title and rights in Canada and comes from the activist wing of the movement. Grand Chief Ron Derrickson is one of the most successful Indigenous businessmen in the country.

Together the Secwepemc activist intellectual and the Syilx (Okanagan) businessman bring a fresh perspective and new ideas to Canada's most glaring piece of unfinished business: the place of Indigenous peoples within the country's political and economic space. The story is told through Arthur's voice but he traces both of their individual struggles against the colonialist and often racist structures that have been erected to keep Indigenous peoples in their place in Canada.

In the final chapters and in the Grand Chief's afterword, they not only set out a plan for a new sustainable indigenous economy, but lay out a roadmap for getting there.

Publisher:
Between the Lines
Publication Date:
2015

Arthur Manuel has participated in the United Nations Permanent Forum on Indigenous Issues since its inception in 2002. Since 2003, he has served as spokesperson for the Indigenous Network on Economies and Trade (INET). Working through INET, Manue...

Grand Chief Ronald M. Derrickson has been elected chief of his Westbank First Nation six times and is one of the most successful First Nations business people in Canada. He was made a Grand Chief by the Union of British Columbia Indian Chiefs in ...