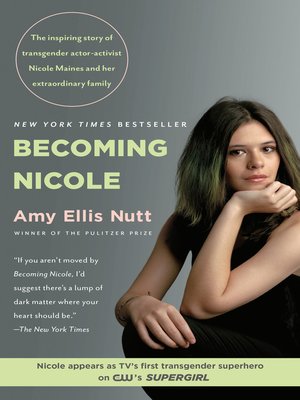 The Transformation of an American Family

Nicole appears as TV's first transgender superhero on CW's Supergirl
When Wayne and Kelly Maines adopted identical twin boys, they thought their lives were complete. But by the time Jonas and Wyatt were toddlers, confusion over Wyatt's insistence that he was female began to tear the family apart. In the years that followed, the Maineses came to question their long-held views on gender and identity, to accept Wyatt's transition to Nicole, and to undergo a wrenching transformation of their own, the effects of which would reverberate through their entire community. Pulitzer Prize–winning journalist Amy Ellis Nutt spent almost four years reporting this story and tells it with unflinching honesty, intimacy, and empathy. In her hands, Becoming Nicole is more than an account of a courageous girl and her extraordinary family. It's a powerful portrait of a slowly but surely changing nation, and one that will inspire all of us to see the world with a little more humanity and understanding.
Named One of the Ten Best Books of the Year by People • One of the Best Books of the Year by The New York Times Book Review and Men's Journal • A Stonewall Honor Book in Nonfiction
"Fascinating and enlightening."—Cheryl Strayed
"If you aren't moved by Becoming Nicole, I'd suggest there's a lump of dark matter where your heart should be."—The New York Times
"Exceptional . . . 'Stories move the walls that need to be moved,' Nicole told her father last year. In telling Nicole's story and those of her brother and parents luminously, and with great compassion and intelligence, that is exactly what Amy Ellis Nutt has done here."—The Washington Post
"A profoundly moving true story about one remarkable family's evolution."—People
"Becoming Nicole is a miracle. It's the story of a family struggling with—and embracing—a transgender child. But more than that, it's about accepting one another, and ourselves, in all our messy, contradictory glory."—Jennifer Finney Boylan, former co-chair of GLAAD and author of She's Not There: A Life in Two Genders
Biography & AutobiographyGay/LesbianSociologyNonfiction

Amy Ellis Nutt won the Pulitzer Prize in 2011 for her feature series "The Wreck of the Lady Mary" about the 2009 sinking of a fishing boat off the New Jersey coast. She is a health and science writer at The Washington Post, the author of Shadows B...

More about Amy Ellis Nutt
Becoming Nicole
Copy and paste the code into your website.
New here? Learn how to read digital books for free