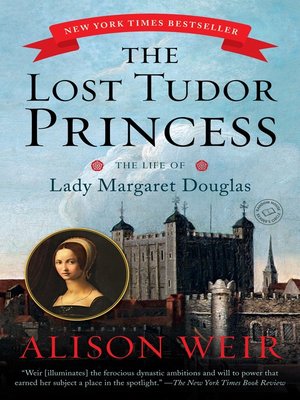 The Life of Lady Margaret Douglas

Biography & AutobiographyHistoryNonfiction
NEW YORK TIMES BESTSELLER • NAMED ONE OF THE BEST BOOKS OF THE YEAR BY THE INDEPENDENT • From bestselling author and acclaimed historian Alison Weir comes the first biography of Margaret Douglas, the beautiful, cunning niece of Henry VIII of England who used her sharp intelligence and covert power to influence the succession after the death of Elizabeth I.

Royal Tudor blood ran in her veins. Her mother was a queen, her father an earl, and she herself was the granddaughter, niece, cousin, and grandmother of monarchs. Lady Margaret Douglas, Countess of Lennox, was an important figure in Tudor England, yet today, while her contemporaries—Anne Boleyn, Mary, Queen of Scots, Elizabeth I—have achieved celebrity status, she is largely forgotten.

Margaret's life was steeped in intrigue, drama, and tragedy—from her auspicious birth in 1530 to her parents' bitter divorce, from her ill-fated love affairs to her appointment as lady-in-waiting for four of Henry's six wives. In an age when women were expected to stay out of the political arena, alluring and tempestuous Margaret helped orchestrate one of the most notorious marriages of the sixteenth century: that of her son Lord Darnley to Mary, Queen of Scots. Margaret defiantly warred with two queens—Mary, and Elizabeth of England—and was instrumental in securing the Stuart ascension to the throne of England for her grandson, James VI.

The life of Margaret Douglas spans five reigns and provides many missing links between the Tudor and Stuart dynasties. Drawing on decades of research and myriad original sources—including many of Margaret's surviving letters—Alison Weir brings this captivating character out of the shadows and presents a strong, capable woman who operated effectively and fearlessly at the very highest levels of power.
Praise for The Lost Tudor Princess

"This is a substantial, detailed biography of a fascinating woman who lived her extraordinary life to the full, taking desperate chances for love and for ambition. It will appeal to anyone with an interest in the powerful women of the Tudor period."—Philippa Gregory, The Washington Post

"Tackling the family from an unexpected angle, Weir offers a blow-by-blow account of six decades of palace intrigue. . . . Weir balances historical data with emotional speculation to illuminate the ferocious dynastic ambitions and will to power that earned her subject a place in the spotlight."—The New York Times Book Review
From the Hardcover edition.
Biography & AutobiographyHistoryNonfiction

Alison Weir is the New York Times bestselling author of several historical biographies, including Elizabeth of York, Mary Boleyn, The Lady in the Tower, Mistress of the Monarchy, Henry VIII, Eleanor of Aquitaine, The Life of Elizabeth I, and The S...

More about Alison Weir
The Lost Tudor Princess
Copy and paste the code into your website.
New here? Learn how to read digital books for free