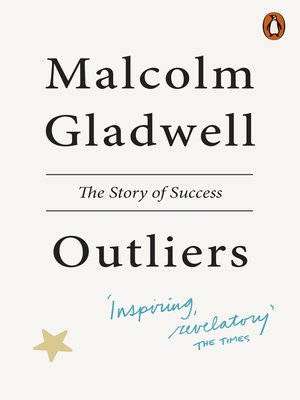 The Story of Success

From the bestselling author of Blink and The Tipping Point, Malcolm Gladwell's Outliers: The Story of Success overturns conventional wisdom about genius to show us what makes an ordinary person an extreme overachiever.

Why do some people achieve so much more than others? Can they lie so far out of the ordinary?

In this provocative and inspiring book, Malcolm Gladwell looks at everyone from rock stars to professional athletes, software billionaires to scientific geniuses, to show that the story of success is far more surprising, and far more fascinating, than we could ever have imagined.

He reveals that it's as much about where we're from and what we do, as who we are - and that no one, not even a genius, ever makes it alone.

Outliers will change the way you think about your own life story, and about what makes us all unique.

'Gladwell is not only a brilliant storyteller; he can see what those stories tell us, the lessons they contain'
Guardian

'Malcolm Gladwell is a global phenomenon ... he has a genius for making everything he writes seem like an impossible adventure'
Observer

'He is the best kind of writer - the kind who makes you feel like you're a genius, rather than he's a genius'
The Times

Author, journalist, cultural commentator and intellectual adventurer, Malcolm Gladwell is a staff writer for the New Yorker magazine. His first book The Tipping Point captured the world's attention with its theory that a curiously small change can have unforeseen effects. His other international bestselling books are Outliers, which looks at the stories of exceptional individuals and reveals the secrets of their success, Blink: The Power of Thinking Without Thinking and What The Dog Saw, a collection of his most provocative and entertaining New Yorker pieces.

Malcolm Gladwell is the author of five international bestsellers: The Tipping Point, Blink, Outliers, What the Dog Saw, and David and Goliath. He is the host of the podcast Revisionist History and is a staff writer atThe New Yorker. He was named o...

More about Malcolm Gladwell
Outliers
Copy and paste the code into your website.
New here? Learn how to read digital books for free