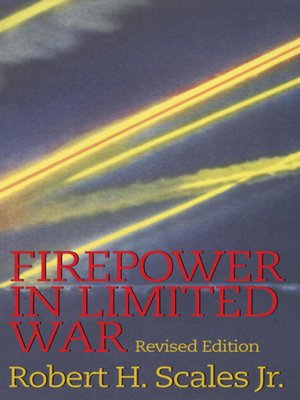 View more libraries...
"Bar none, the best book on fire support in the English language and one of the most accessible works on tactics I have ever read."—Bruce Gudmundsson, author of On Artillery
The military of the United States is the world's strongest. Our armed forces are equipped with weapons of remarkable accuracy and unprecedented destructive power. In the Gulf War, allied forces used these weapons in what turned out to be a high-tech shooting gallery. The pinpoint accuracy of the sharpshooter's rifle is now routinely expected in the delivery of thousand pound bombs.
Events in Somalia and the Balkans have aptly demonstrated, however, the profound limitations of firepower in limited conflicts of low intensity. Yet, these are the kinds of war we are most likely to encounter as we proceed down the path of the new world order.
Robert Scales examines this problem through his analysis of the role of firepower in the wars in Indochina, the Soviet war in Afghanistan, the Falklands War, and the Gulf War. Chosen for the prestigious Marine Corps Commandant's Reading List, Firepower in Limited War is must reading for everyone interested in national defense and all military professionals.