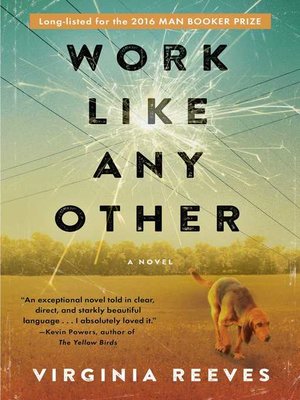 In this "inventive, beautiful, and deceptively morally complex novel" (The Miami Herald), a prideful electrician in 1920s rural Alabama struggles to overcome past sins, find peace, and rescue his marriage after being sent to prison for manslaughter.
Roscoe T Martin set his sights on a new type of power spreading at the start of the twentieth century: electricity. It became his training, his life's work. But when his wife, Marie, inherits her father's failing farm, Roscoe has to give up his livelihood, with great cost to his sense of self, his marriage, and his family. Realizing he might lose them all if he doesn't do something, he begins to siphon energy from the state, ushering in a period of bounty and happiness. Even the love of Marie and their child seem back within Roscoe's grasp.

Then a young man working for the state power company stumbles on Roscoe's illegal lines and is electrocuted, and everything changes: Roscoe is arrested; the farm once more starts to deteriorate; and Marie abandons her husband, leaving him to face his twenty-year sentence alone. As an unmoored Roscoe carves out a place at Kilby Prison, he is forced to ask himself once more if his work is just that, or if the price of his crimes—for him and his family—is greater than he ever let himself believe.

Work Like Any Other is "a consummately well-written, deeply affecting, thought-provoking American historical novel of hard labor, broken dreams, moral dilemmas, violence, racism, and the intricacies of marriage, parenthood, and friendship. Hope is found in reading, compassion, forgiveness, and good, honest work, whatever form it takes. Virginia Reeves's gripping, dynamically plotted, and profound novel will resonate on different frequencies for men and women and spark soul-searching and heated discussion" (Booklist, starred review).