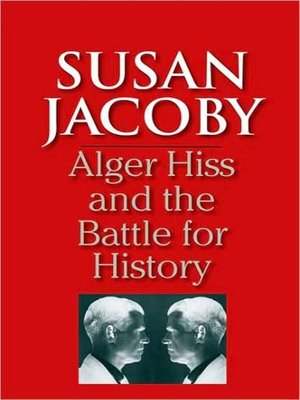 Alger Hiss and the Battle for History

Books on Whittaker Chambers and Alger Hiss abound, as countless scholars have labored to uncover the facts behind Chambers's shocking accusation before the House Committee on Un-American Activities in the summer of 1948---that Alger Hiss, a former rising star in the State Department, had been a Communist and engaged in espionage.

In this highly original work, Susan Jacoby turns her attention to the Hiss case, including his trial and imprisonment for perjury, as a mirror of shifting American political views and passions. Unfettered by political ax-grinding, the author examines conflicting responses, from scholars and the media on both the Left and the Right, and the ways in which they have changed from 1948 to our present post–Cold War era. With a brisk, engaging style, Jacoby positions the case in the politics of the post–World War II era and then explores the ways in which generations of liberals and conservatives have put Chambers and Hiss to their own ideological uses. An iconic event of the McCarthy era, the case of Alger Hiss fascinates political intellectuals not only because of its historical significance but because of its timeless relevance to equally fierce debates today about the difficult balance between national security and respect for civil liberties.

Susan Jacoby is the author of more than ten books, including the New York Times bestseller The Age of American Unreason. She is a frequent contributor to national publications, including the Times and the Washington Post.

More about Susan Jacoby
Alger Hiss and the Battle for History
Copy and paste the code into your website.
New here? Learn how to read digital books for free