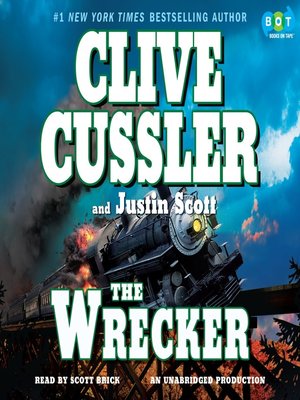 FictionThrillerHistorical Fiction
In The Chase, Clive Cussler introduced an electrifying new hero, the tall, lean, no-nonsense detective Isaac Bell, who, driven by his sense of justice, travels early-twentieth-century America pursuing thieves and killers . . . and sometimes criminals much worse.
It is 1907, a year of financial panic and labor unrest. Train wrecks, fires, and explosions sabotage the Southern Pacific Railroad?s Cascades express line and, desperate, the railroad hires the fabled Van Dorn Detective Agency. Van Dorn sends in his best man, and Bell quickly discovers that a mysterious saboteur haunts the hobo jungles of the West, a man known as the Wrecker, who recruits accomplices from the down-and-out to attack the railroad, and then kills them afterward. The Wrecker traverses the vast spaces of the American West as if he had wings, striking wherever he pleases, causing untold damage and loss of human life. Who is he? What does he want? Is he a striker? An anarchist? A revolutionary determined to displace the ?privileged few?? A criminal mastermind engineering some as yet unexplained scheme?
Whoever he is, whatever his motives, the Wrecker knows how to create maximum havoc, and Bell senses that he is far from done?that, in fact, the Wrecker is building up to a grand act unlike anything he has committed before. If Bell doesn?t stop him in time, more than a railroad could be at risk?it could be the future of the entire country.
Filled with intricate plotting and dazzling set pieces, The Wrecker is one of the most entertaining thrillers in years.
FictionThrillerHistorical Fiction

More about Clive Cussler
The Wrecker
Copy and paste the code into your website.
New here? Learn how to read digital books for free