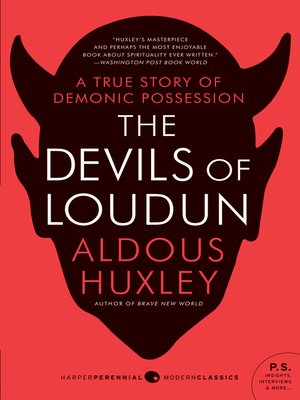 "HUXLEY'S MASTERPIECE AND PERHAPS THE MOST ENJOYABLE BOOK ABOUT SPIRITUALITY EVER WRITTEN. ."
— Washington Post Book World

Aldous Huxley's "brilliant" (Los Angeles Times) and gripping account of one of the strangest occurrences in history, hailed as the "peak achievement of Huxley's career" by the New York Times

In 1632 an entire convent in the small French village of Loudun was apparently possessed by the devil. After a sensational and celebrated trial, the convent's charismatic priest Urban Grandier—accused of spiritually and sexually seducing the nuns in his charge—was convicted of being in league with Satan. Then he was burned at the stake for witchcraft.

A remarkable true story of religious and sexual obsession, The Devils of Loudon is considered by many to be Aldous Huxley's nonfiction masterpiece.